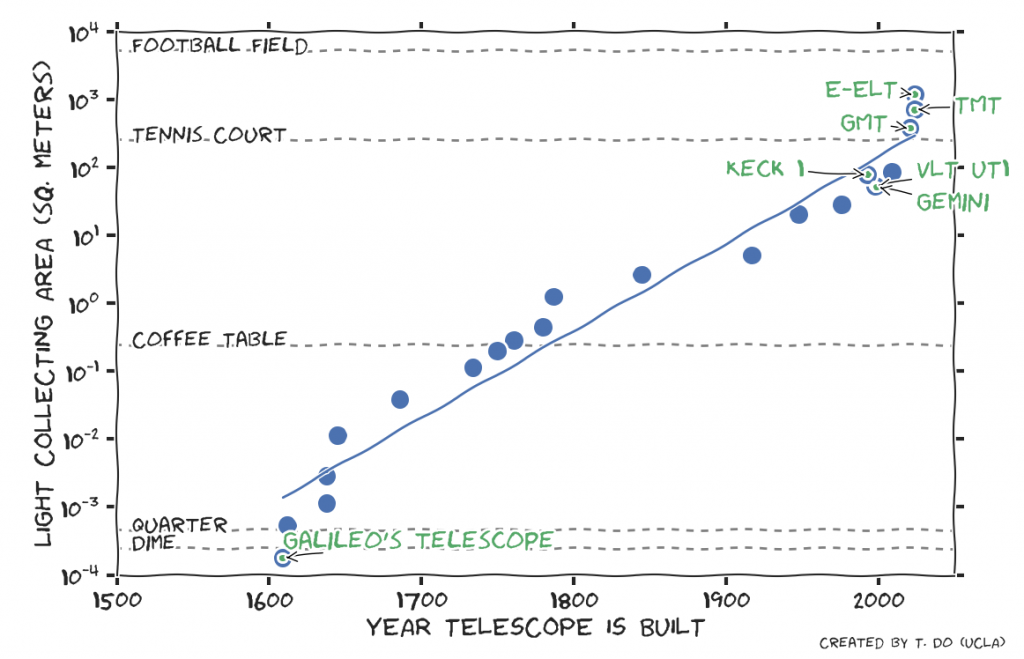 One of the most important changes in telescopes over time is their size. Larger telescopes collect more light, which lets us see fainter and farther objects. Galileo’s first telescope had a 1.5 cm diameter opening to let light through its lenses. This is slightly smaller than a dime. Using this telescope he discovered the moons of Jupiter. Today, the largest optical and near-infrared telescopes are imaging Jupiter-sized planets in other solar systems, and seeing light from some of the first galaxies. The next generation of telescopes coming in about 10 years, like TMT, E-ELT, and GMT are predicted to see the first stars in the universe.

This is possible through the tremendous pace of technological progress. The above plot uses data tabulated on Wikipedia to show the light collecting area of large telescopes at the time they were built. Between Galileo’s telescope and the Keck telescopes, their diameters have grown by over a factor of 600, while their area has grown by over 400,000 times. The line in the plot is a exponential fit to the relationship between time a telescope was complete and the collecting area (Area = Ao exp(time/Tau)). This means that the area of telescopes have doubled roughly about once every 20 years over the 400 year history of telescopes. This trend is not always smooth as there can be a large jump in the size of the mirrors between generations of telescopes. For example, the jump from Keck (1993) to TMT (2024) will represents a change from 10 m to 30 m, which corresponds to a factor of 9 increase in area in 31 years.